Written by:
Philomena Schwab (Head of Marketing for Team Niche and Capsule Games)

Please note that all links have been removed from this post because of the exhibition setting.

Running a Greenlight campaign is something many indie developers are confronted with at some point in their career. Being responsible for marketing in two indie teams, I came into the situation to help getting two games through Greenlight at the same time. This gave me a chance to compare results and discusscontribute my findings to make the Greenlight process a little more transparent to fellow developers.

Spoiler: The results are very different!

Even though both campaigns were coordinated by the same people, the results were very different. If you want to join us on our quest of “What the heck happened here?!” keep on reading.

I will give you a quick tour through our Greenlight campaign and talk about: Our promo material, the launch, the influence of our communities, our social media strategy and reach, traffic sources and our learnings.

Both games are developed in Zurich, Switzerland.

Game 1: Niche – a genetics survival game, a simulation/strategy game about genetics
Made by: Team Niche

Whether a game will make it through Greenlight heavily depends on its promo material. Most people will decide whether to vote yes or no after watching your trailer/gameplay video. Many will also look at the screenshot and a few will go through the description text that you provided.

One of the most important assets for a successful Greenlight campaign is your preview image. This image alongside your game’s and studio’s name are the only things people will see at first when checking the list of games waiting to be greenlit.

The preview image for Niche. This gif was designed to communicate the games topic (evolution/genetics) and to catch the eye of the observer thanks to the fast color switches and form changes. This gif was created by the amazing artist Stephanie Stutz.

The preview image for Tower Offense. With this gif we wanted to illustrate the surprising moments of Tower Offense and offer a glimpse into the game’s graphic style. The pink background stood out very much.

If you convinced a potential voter to click on your preview image, they will enter your projects Greenlight page to gain further information. This is the time for your trailer and screenshots to shine!

With Niche’s trailer we tried a humoristic approach. We were really uncertain if this kind of video would work on Greenlight, since it shows almost no gameplay. But we wanted to try it out.

Tower Offense’s trailer is full of gameplay scenes with chiptune music. Gameplay is the core of Tower Offense and we wanted to show it in action.

With Niche’s screenshots we tried to offer a broad variety of images (ingame close-ups, overview images with UI and promotional images), showing the game from different perspectives and in a wide color range. 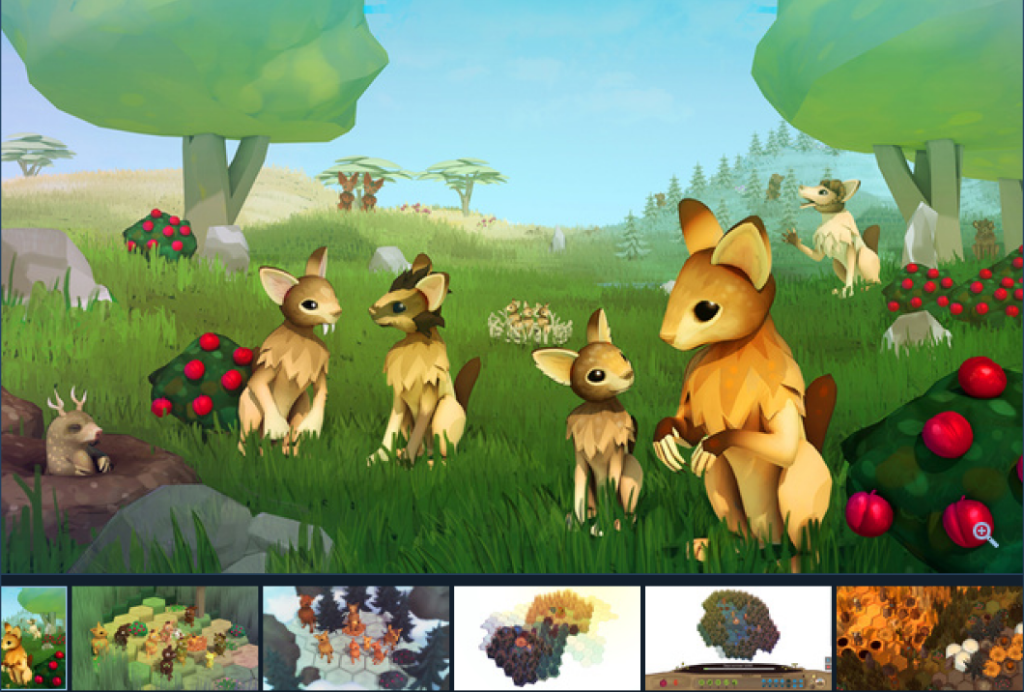 For Tower Offense we decided to go with in-game screenshots. Using various levels and field structures brought in variation, mostly due to the different background colors. 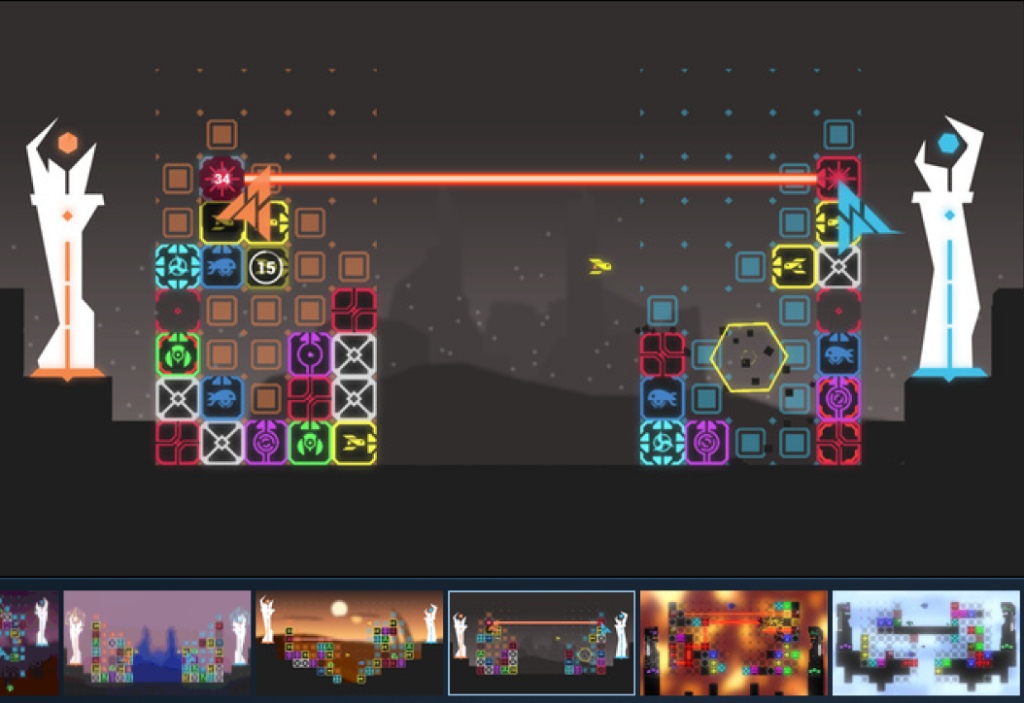 Aside from the material used directly on the Greenlight page it’s also a good idea to create a promo visual to let your friends and followers know about your Greenlight campaign.

This is the key visual we used to promote Niche on social media. It was made especially for this purpose of announcing our Greenlight and had never been shown before. This image was also created by Stephanie Stutz. 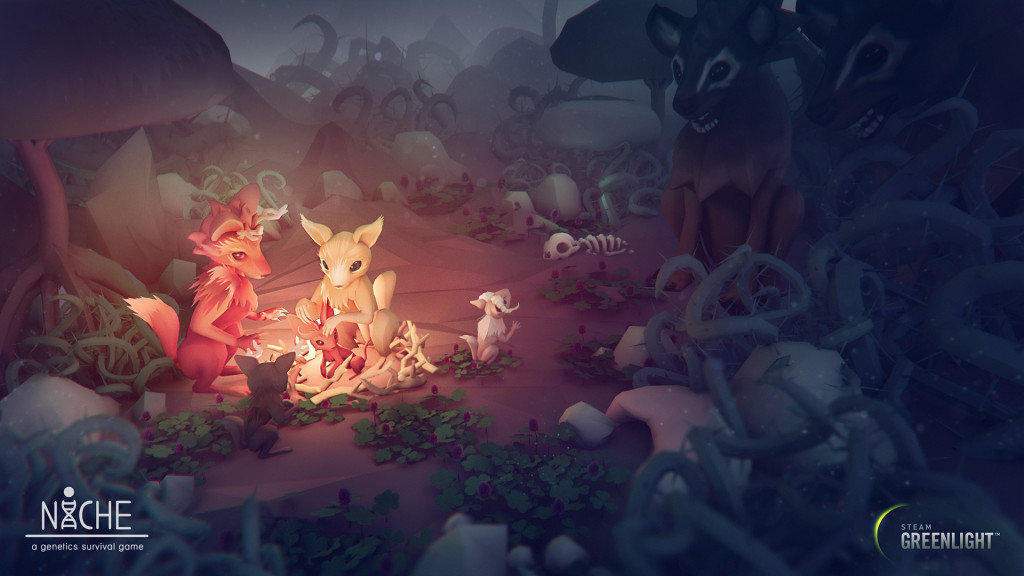 Tower Offense’s key visual for the Greenlight promotion on social media. We wanted to make the message really obvious so the call to action would come across clearly.

With all the promo material in place, we can now launch the Greenlight campaigns! On Wednesday evening (21.1.2016) at 22:30 (UTC+1) Niche went live. Tower Offense followed a few hours later. The launches were coordinated by the same people.

Why we launched at the same time:

This is what happened for Niche:
We posted the news in our playtester group on Facebook (about 300 people at that time) right after launch. Approximately 100 people headed over to Greenlight and voted yes. This gave us a great boost of yes votes in the beginning, 80% yes, 20% no. 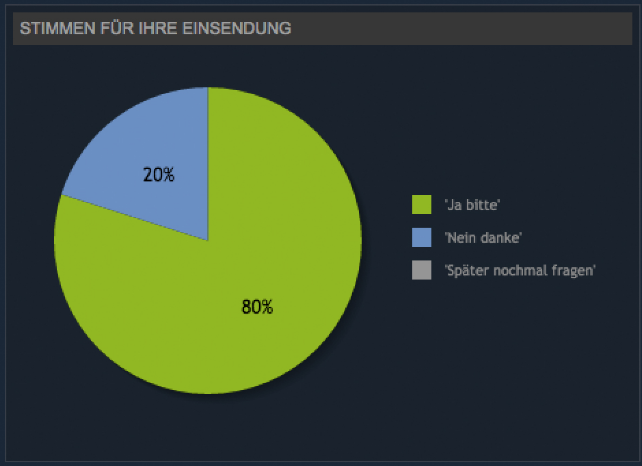 This is what happened for Tower Offense:
We posted the news in our playtester group on Facebook (about 100 members at that time) right after launch. Approximately 25 people headed over to Greenlight and voted yes. This was not enough for an initial yes boost. 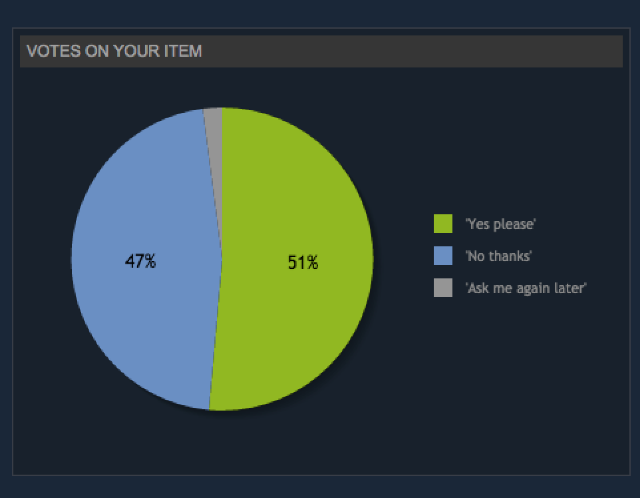 We kept on sharing the news about both games Greenlights in Facebook groups (Indie Game Developers, TBS, etc.) and on Twitter. The Niche promo images seemed to resonate with people and generated an amount of over 700 likes and 150 retweets during the course of the Greenlight.

After a happy hour of watching the votes climb higher, something strange happened. We suddenly couldn’t access Niche’s Greenlight page anymore. Mails and social media messages swarmed in, telling us that our link was broken. Well it wasn’t our link, Steam seemed to have server issues. Those issues affected a handful of Greenlight pages, ours being one of them.

After about two hours of starring helplessly at our disconnected page and responding to lots of “Your site is down” messages we decided to go to bed. “Let’s refresh the site one last time”, we said. And suddenly it was there again and we could sleep without having nightmares. 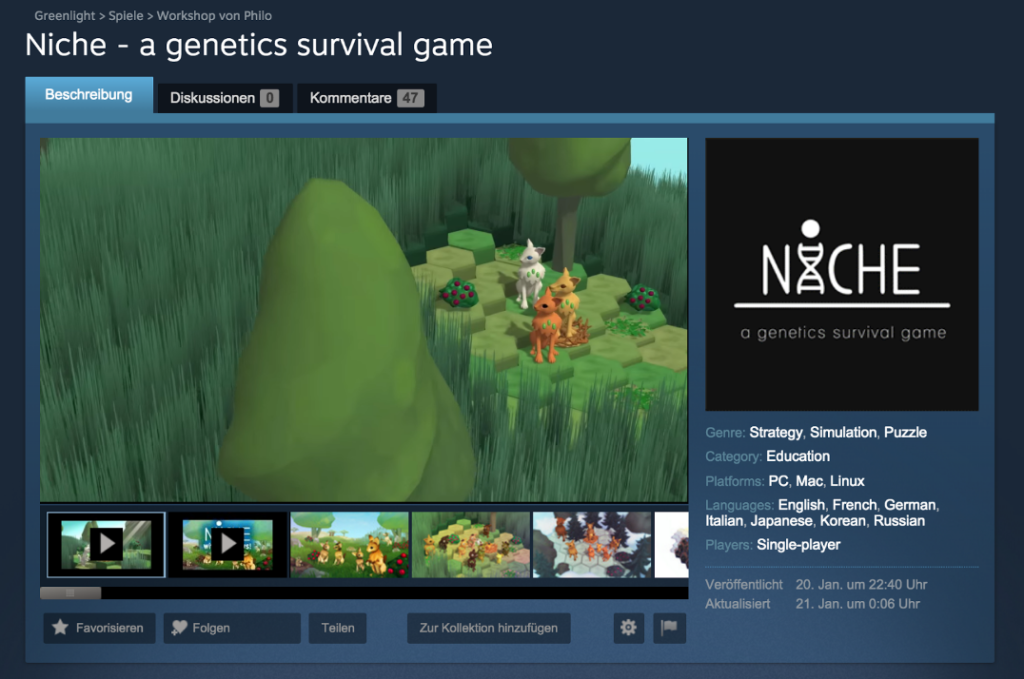 After less than 24 hours, Niche reached the top 100 and was climbing up steadily. Another 24 hours later, Niche had reached the top 10 of all games on Greenlight. As soon as a game reaches the top 100 it has a high chance to get greenlit with the next batch. The batch came six days later. Niche got greenlit.

The final stats for Niche: 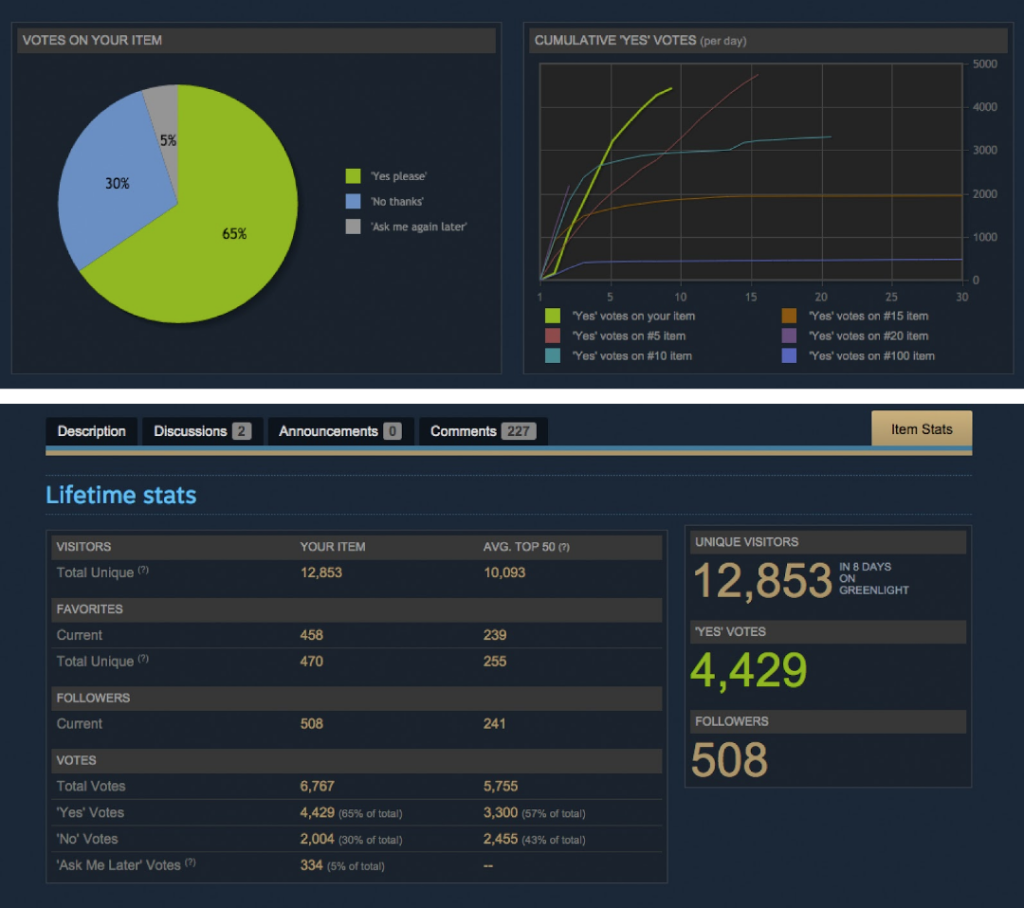 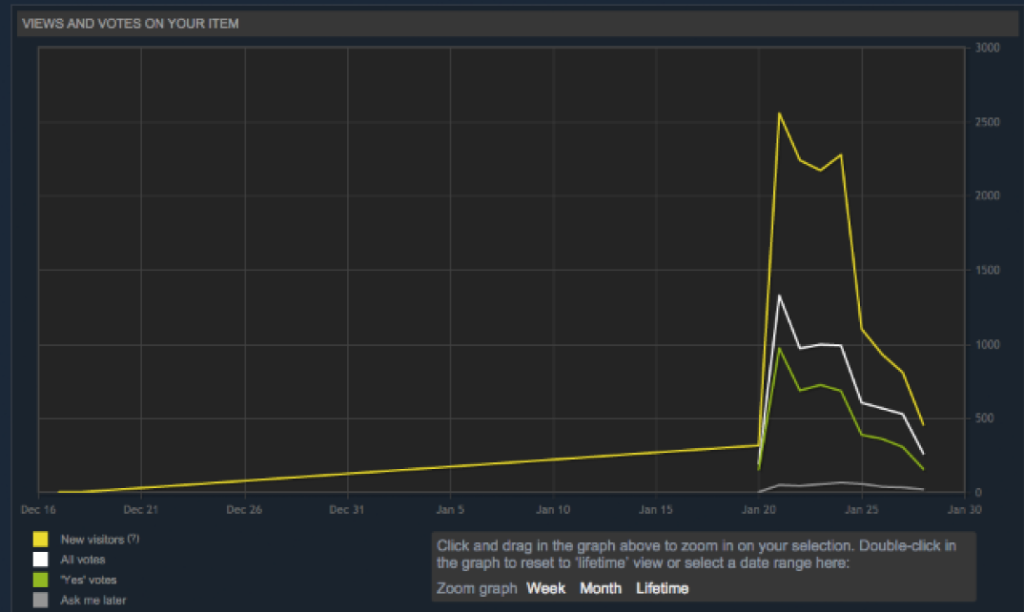 If we look at the graph of the above image we can see a significant drop of views on the 23th January. It was the first day we were not displayed on the first page of “Recent submissions” anymore. But the views kept coming in from inside of Steam anyways. 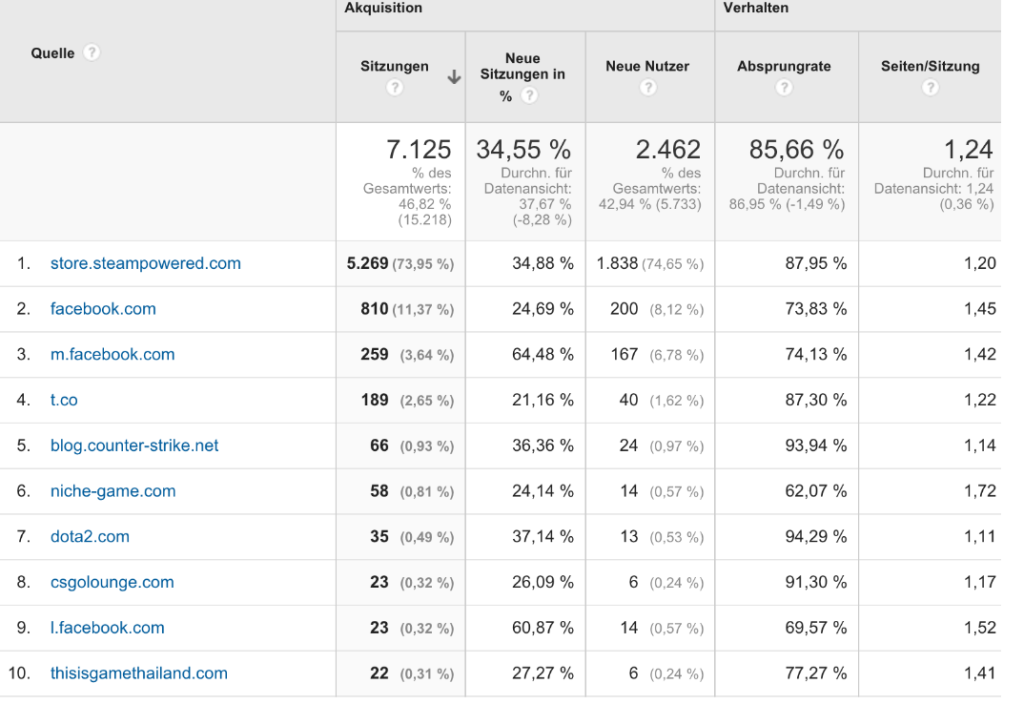 Things weren’t going so well for Tower Offense. I was quite startled at this fact. Tower Offense seemed to be the perfect fit for the Steam audience. I was expecting it to perform better than Niche. 15 days after its launch on Greenlight, these were the stats. 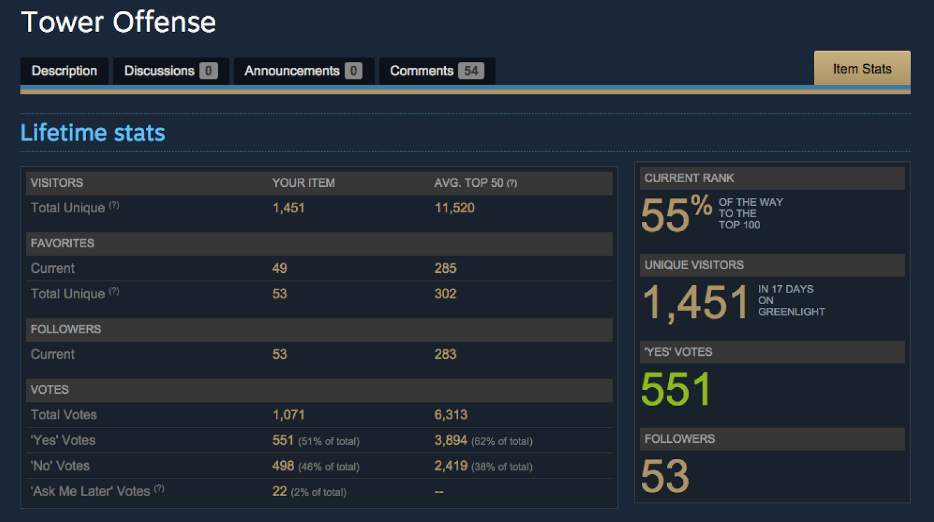 Tower Offense is a great game. I’ve seen barely anyone not loving this game when playing it. But when you are on Greenlight, people don’t play the game. Sure, you can upload a demo but most people will decide by looking at your video and screenshots and maybe your description. One could think that Niche was more appealing to the Steam audience. There is one thing that bothers me though:

Niche’s Greenlight page had almost 10-times as many visitors as Tower Offense’s. According to Google Analytics about 75% of the traffic for both project pages came directly from Steam. Based on my observations, a Greenlight page receives most of its views from the “Recent Submission” category until a few days after it’s launch. As soon as the game drops to the second page of “Recent Submission” the daily views are starting to decrease. After these first days the main traffic source for a Greenlight page is the “Your Voting Queue” category in which Steam users receives suggestions on what to vote for. The question is, why is a game suggested to a user?

My explanation is that Niche was frequently displayed in the “Your Voting Queue” category because of its good yes/no vote ratio. It all seems to come down to our initial community push. Since Niche had a high percentage of yes-votes from the very beginning, it seems to have been picked up by the “Your Voting Queue” category early, leading to a high count of unique visitors on the Greenlight page. These are my assertions. Without more data, it’s impossible to be sure.

A rocky start is never a reason to give up. Capsule Game’s artist Andreas reworked the promo material of Tower Offense in order to make it more appealing to potential voters.

Gifs can be added to the screenshot section on the Greenlight page. We produced a few and posted them. We also used the gifs to generate another wave of attention on Twitter and Facebook. Unfortunately our efforts were fruitless. There was no traffic coming to our Greenlight page anymore. We tried to bring in voters from outside, mostly friends and people on social media.

We received feedback that the Tower Offense trailer didn’t communicate the gameplay clearly enough. As a result we started working on a video that explained the game’s main mechanics.

While still working on the video, we were surprised by a sudden notification about three weeks after launch. Even though we had not reached the top 100, we got greenlit with the next batch. It seems that Valve decided to let Tower Offense pass the test without fulfilling assumed conditions. There seem to be many factors involved that aren’t communicated.

Being told that the Greenlight process had become very easy by other developers, we got careless. Even though Tower Offense was in the middle of a graphical rework, we assumed that we would still make it through Greenlight without much effort. Instead, we should have waited for the rework to be finished and carefully plan the Greenlight launch without being stressed by external factors too much. The benefits of running the campaigns concurrently turned out to be less significant than we had hoped.

There is one thing I seem to have forgotten and was clearly reminded of thanks to the Greenlight: people don’t know your game. Our first trailer for Tower Offense is thrilling to watch for people who have played the game, because they can understand the situation and the pattern. For someone who hasn’t played Tower Offense, the first video we created is noise. Things flying around, blocks being build with no clear purpose. It is very important to constantly show your game to people who have never seen/tried it before and ask for their feedback.

Greenlight is a great thing for an indie developer. If Valve offered to directly sell our games on Steam without going through the Greenlight process, I’d refuse. It offers a lot of exposure and is a great way to find new members for your game’s community. Greenlight allows you to get an insight of what future buyers are expecting from your product.

In order to run a successful Greenlight campaign I suggest:

I hope this insight helps you plan your future Greenlight campaign. It can be achieved with enough preparation